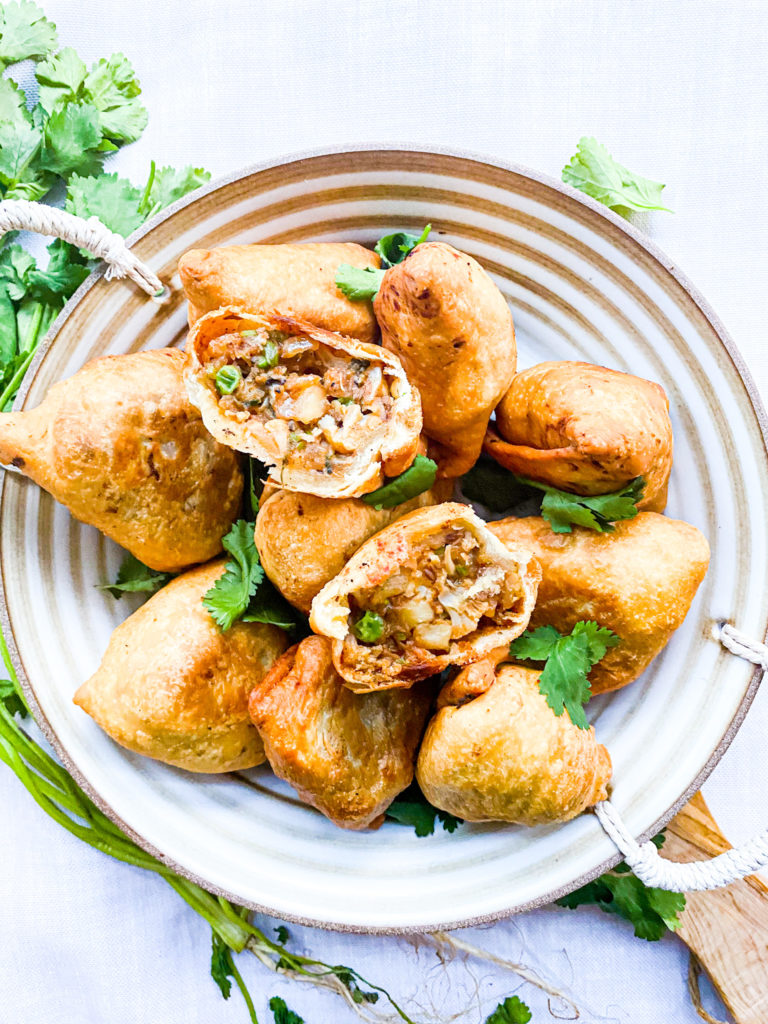 This food has travelled far and wide and now it is a popular snack in most part of the world. Did you know that samosas are not originally from India?  Yes, you read it right. Only lately I read that these crispy parcels had started their journey from Central Asia to all the way to South Asia many centuries ago leaving their footsteps along the way and it was introduced to India by Eastern chefs during the Delhi Sultanate rule.   Over the years,  the original recipe has been modified to suit the local’s palate and happily settled among the community. Isn’t that interesting?

Perhaps, its biggest secret to popularity and survival over the centuries is its different varieties of fillings catering to varies palates. Although there are countless fillings to choose from, potatoes, onions and peas are the most common filling. However, in today’s recipe, I am going to introduce another vegetable – cauliflower, to amp up the flavour and the texture of the filling. Dare I say, they turned out way better than the shop-bought ones so here I am sharing the recipe with you.  These homemade samosas are not only better than than the shop about ones, but also vegan friendly. When you are serving these three-point beauties, do not forget to serve them with a piping hot chai tea and a chutney of your choice! 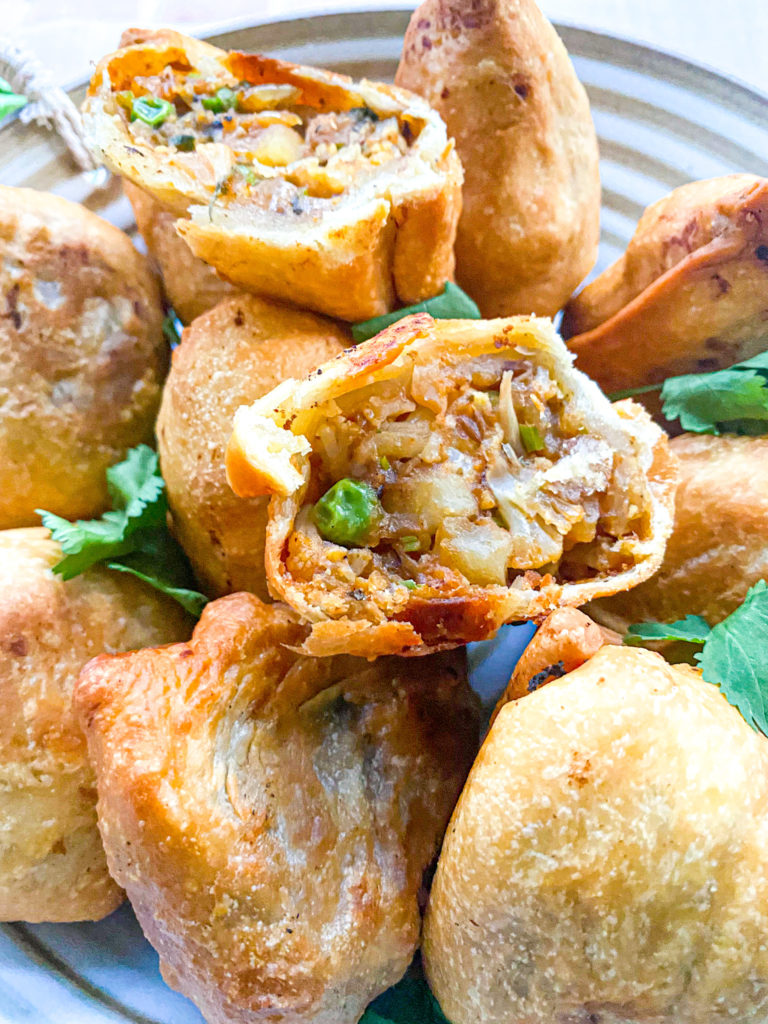 Dough;
1. First make the dough. Add all the ingredients, except water, into a mixing bowl. Pour water slowly and knead for about 15 minutes or until the dough is firm and smooth. I used a dough mixture to do the job for me.
2. Cover the bowl with a damp cloth and set aside until we make the filling.

Filling;
1. To make the filling, fist boil the potatoes whole until tender. drain water and let it cool. Once cool, peel the potatoes and roughly mash them using a fork.
2. Cut the cauliflower into small florets.
3. Melt gee or plant-based butter in a large non-stick pan. Add fennel seeds, cumin seeds and chopped onion. When onion starts to change its colour, add fresh chillies and caused ginger-garlic. Sautee for bout 2 – 3 minutes.
4. Add cauliflower and store well, cook until cauliflower is tender.
5. Add the mashed potatoes, peas, turmeric, cumin powder, coriander powder, chilli powder and salt. Stir well to combine all the ingredients. 6. Cook for 2-3 minutes. Turn off the heat and add the fresh coriander leaves and combined well. Allow the mixture to cool.

Folding the samosas;
1. While the mixture is cooling, divide the dough into 8 – 10 potions and roll each into balls with the palm of your hand.
2. On an oiled wooden board, roll out each ball into flat circles about 15cm in diameter. Cut each dough circle in half.
3. Fold each semi-circle to form a little pocket. Press the longer side of each pocket firmly together with moisture fingers to seal.
4. Put 2 tbsp of mixture into the pocket and seal edges with moistened fingers. Repeat until the filling is finished.
5. Heat oil in a deep pan. When the oil is hot enough, add the samosas one at a time without overcrowding the pan. Remove samosa with a slotted spoon and drain well on absorbent kitchen paper. Serve warm. 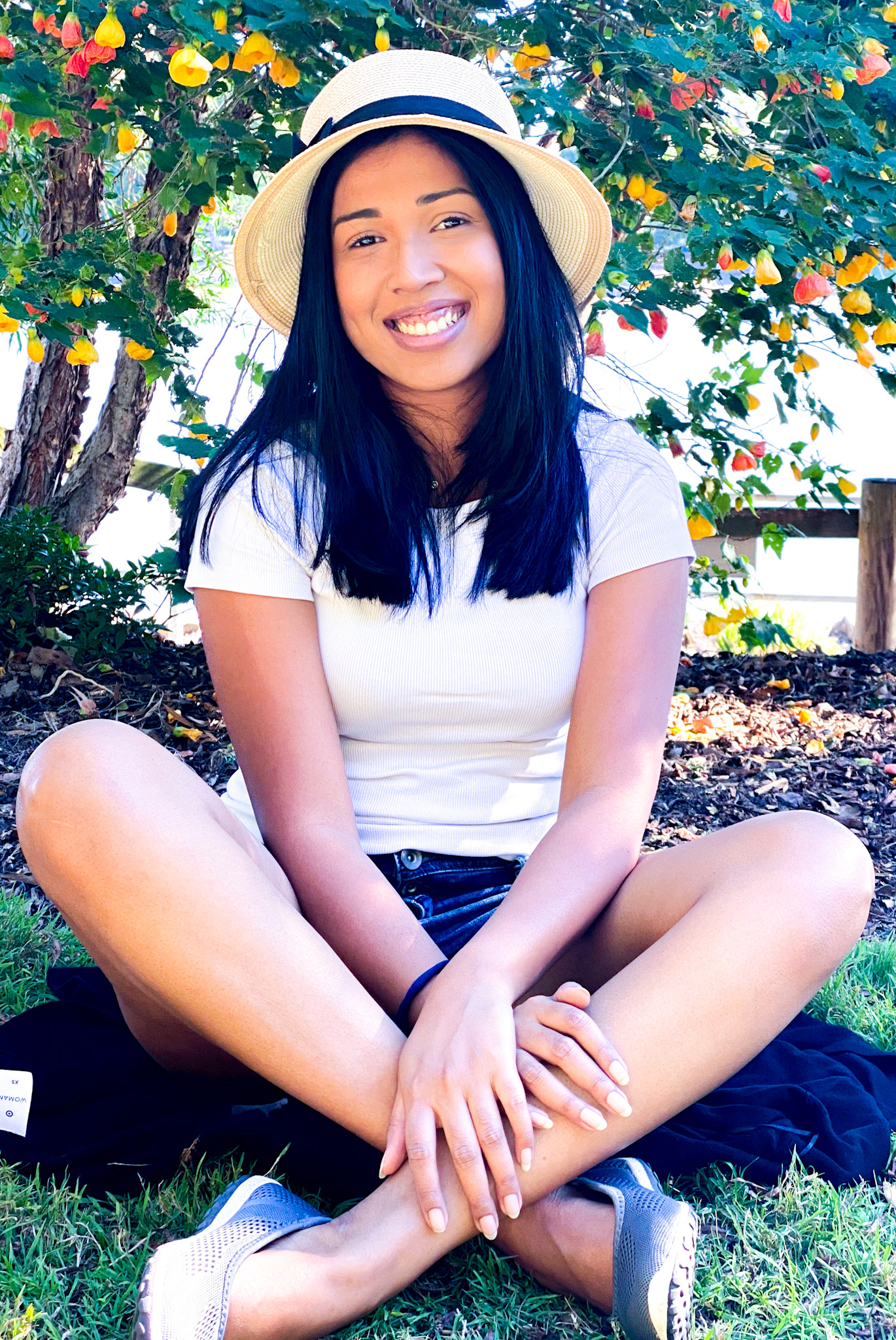 Hi! I am Dinusha. I live in sunny Brisbane, Queensland with my loving husband and gorgeous Benji boy, who is a border collie. Here, I am sharing mainly plant-based recipes and want to show you how easy it is to adopt into a meat-free diet. Welcome to my little space on the internet!